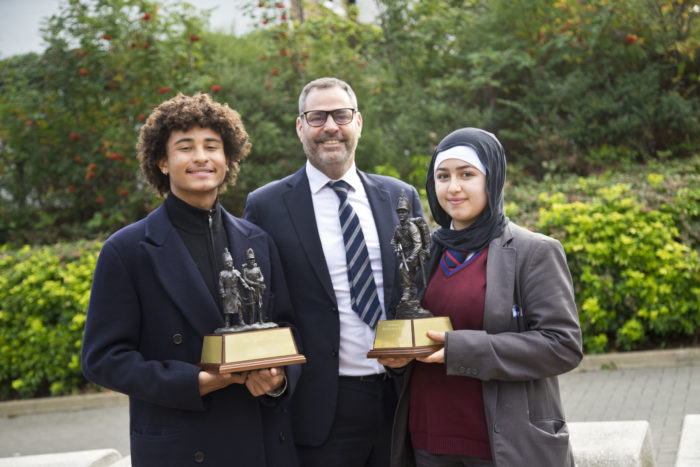 Two Hammersmith Academy students were among the four young prize winners from H&F celebrated at the first annual Mayor’s Rifle Regiment Awards Ceremony at the Cavalry and Guards Club in Green Park.

The prizes were in four categories: academic, sport, social contribution and overcoming adversity. The citations for them highlighted their special contributions of each one.

“Marley, Chair of the Masbro Youth Club Youth Committee, has a burning desire to make the world a better place for young people in the community – something he hopes to advocate more for by joining the H&F Youth Council and running for Youth Mayor. His leadership in running projects such as the London Youth City Leaders Community programme, and mobilising young people for good causes such as delivering food parcels to the elderly during the pandemic has been a shining light for other young people to aspire to.”

“Bayan has been a regular attendee at the football sessions hosted by Sulgrave Youth Club and Chelsea FC Foundation, showing massive commitment and enthusiasm each week.”

The ceremony included speakers Major Tattershall and Major Vandaele-Kennedy of the Rifles, Mayor PJ Murphy and Councillor David Morton, H&F representative for the Armed Forces Community, who presented the four young winners with their awards in each respective category.

In his speech, Mayor PJ Murphy said: “We’ve teamed up with the Rifles to celebrate all those young people in our community that just get on and do things and are overlooked by other awards. We want to shout out their selfless achievements and say ‘Thank You’.”

Cllr David Morton, H&F representative for the Armed Forces Community, also congratulated the winners on their fantastic achievements, adding: “We are delighted to participate in this prestigious award from the Rifles, which recognises and rewards the very characteristics which the regiment values in an individual. The enthusiasm, hard work and achievement exhibited by our young people is something of which we can all be proud.”

The Mayor’s Rifles Prize is a newly-established award sponsored by the borough’s regiment, The Rifles, Cllr Morton and Mayor PJ Murphy. The F Rifles Company is the British Army’s West London Reserve Infantry and is based in Princess Louise House in Hammersmith Road.